↓
Home Main Navigation ↓
Skip to primary content
Skip to secondary content
Home→Healthy Lifestyle→Vaccination – A Controversial Medical Science Topic
Vaccination is one of the most controversial medical science topics in recent history and I was a blind believer until I started my own research.

Some questions: If you know all the answers well and good than you are able to make your informed decision. If unsure read on and research plentiful sources below until all doubts are clarified.

What I mostly found in the pro-vaccine argument is that the historical scientific evidence and application of vaccines was proven many times to be a save and successful procedure to combat diseases, backed by experiments and trials. But I found it to be exactly the opposite and this can be explained only by self-serving Industry and personal interests and some reports indicate even worse. Government statistics and independent research often found that vaccines have severe side effects and contain toxins which kill people, especially babies, that are backed by real persons reports. If you belief that every medication has side-effects and will cost human well-being or lives to some extent, well that is the typical casual approach of modern science believers.

Playing Save with Herd Immunization 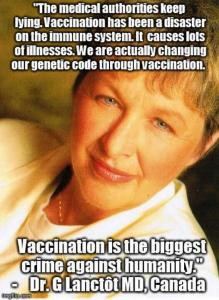 The latest move of mainstream medicine is a disturbing push to get at least 95% of people vaccinated to achieve herd immunity so that the vaccinated can feel safe!? Do vaccinations not protect 100% of its users, is this not a contradiction in itself?! Besides all the researched proof that vaccines have not achieved any significant protection, what about self-determination and the right of choice. Or are we living in a Medical/Pharmaceutical dictatorship were only one truth exists. Is it us against them again and does everybody have to believe in the same God? This fear driven approach simply smells like a huge money making scam, remember swine flu pandemic 2009.

And whatever the good intentions are to promote vaccines they should not affect freedom of choice and in this way the well-being of informed fellow people, which is taken away if there is political and legal pressure involved enforcing a questionable approach to health. Well the argument that vaccinated people feel threatened by un-vaccinated people does not add up except of course only if vaccines don’t work. But then why bother in the first place. I feel rather threatened by vaccinated people because they spread their immunised disease in the first few days when injected with life virus vaccinations.

I am aware that not all Pharmaceutical Companies are corrupt or creating poisonous drugs, and that a toxin can be also a medicine depending on the amounts and circumstances, and that many work in good faith and have good intentions, and that some are creating effective medicines. But I have found so much negative reports and am pointing to the big players in that business, since they seem to be blinded by their successful money making schema and have lost contact with the essential rule “Do no harm!”. From what I read the overall attitude seems to be people have to make sacrifices for the greater good and since nobody can stop us (Pharmaceutical Industry/Medical Establishment) we can prescribe and sell what we want.

By now it is very clear to me that most of the problems humans face are caused by the profit driven corporate interests with no regards to humans and the environment. Starting with a corrupt finance system creating fiat currency, over to corrupt governments and corporations, to brainwashed consumers. An unintelligent and unaware enslavement system which uses fear to keep the status quo and to control the masses. As is reflected also in the pharmaceutical industry promoting vaccinations and other useless drugs, the oil industry delaying real energy alternatives from being established, the military-industrial complex helping secure more resources for a very wasteful and polluting society leaving a huge death trail. And the Federal Banking system fuelling and promoting all of that. All in the name of a free market which obviously only benefits the big players and the 1%.

Millions are starving and a third of world population is on the brink to it and the rest is actively poisoning our sole live base through mindless production and consumerism. Just promoting mainstream profit driven “science” as reflected in vaccinations, which is used for population control and even worse.

Again read the dozens of articles and reports provided as web links below and do your own research, connect the dots and get the bigger picture of who is really a fraud, and to what extent you promote all that and simply take your responsibility. It all starts and ends with you.

As in my perception all of us I started out in life very innocent believing earth is a safe place, which is essentially true, and you are loved and taken care of by your family, community and authorities. But there are misguided/abused/unaware beings out there that are making life hell for themselves and many people in the name of profit and security. It is all about the money and keeping control and authority. With a selfish attitude misusing their power and making sure their beliefs dominate others, well out of fear. Fear is normally a healthy response to a physical threat, but can be the most destructive force in life creating disease, terror and eventually kill you. I am pointing to fear of dying, fear of inferiority, fear of not getting enough, fear of losing control, etc.

I am not working in a medical profession, but I underwent a three year training in Naturopathy as mentioned before, which gave me a basic understanding of mainstream medical beliefs and their ancient alternatives. Therefore I have read a lot, all the sources above and many more, about health, medical science and this vaccination topic, its efficacy and side effects and dispute any claims made by any mainstream medical authority and its related Medical/Pharmaceutical studies. I have read enough independent reports and articles from different specialists and scientific sources to condemn vaccination to be simply a money making fraud, which is essentially used for population reduction.